Connecting stars is an application of information visualization oriented to cinematography, with its focus on the actors. This application allows visualizing data about the money earned by movie stars as well as the grosses of their movies. In this presentation the stars are the actors, the larger the diameter the greater the amount of money that the actor grossed in all the starred movies. By connecting different stars, the number of films and information (name, studio, year, lifetime gross) of which they were part appears. The information was retrieved from the website Box Office Mojo (http://boxofficemojo.com), on April 3rd, 2014. The database is composed by 703 actors and 6327 movies. 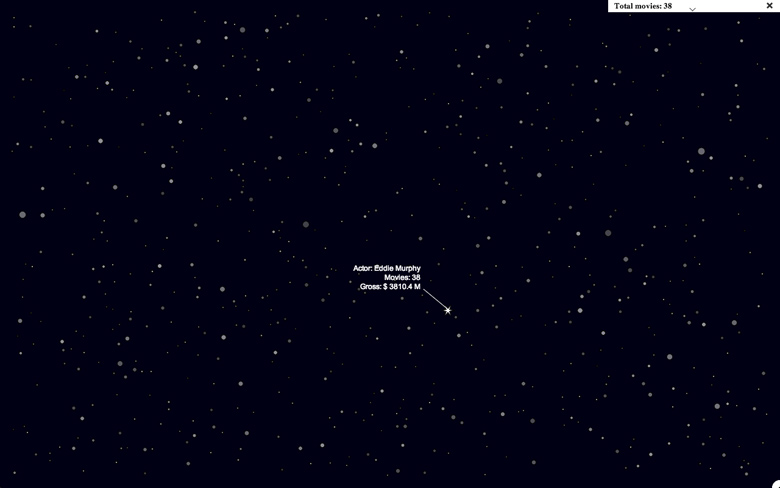 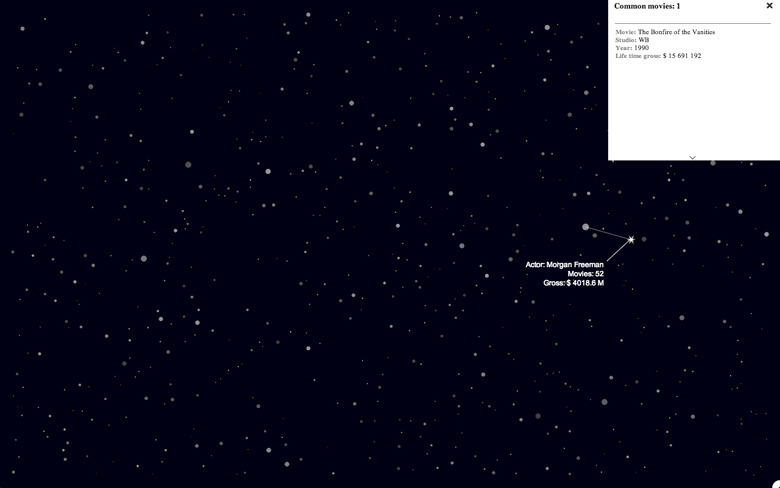 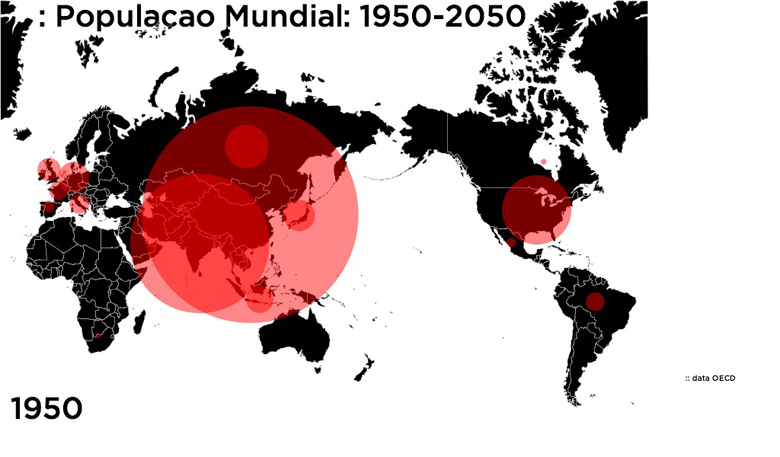 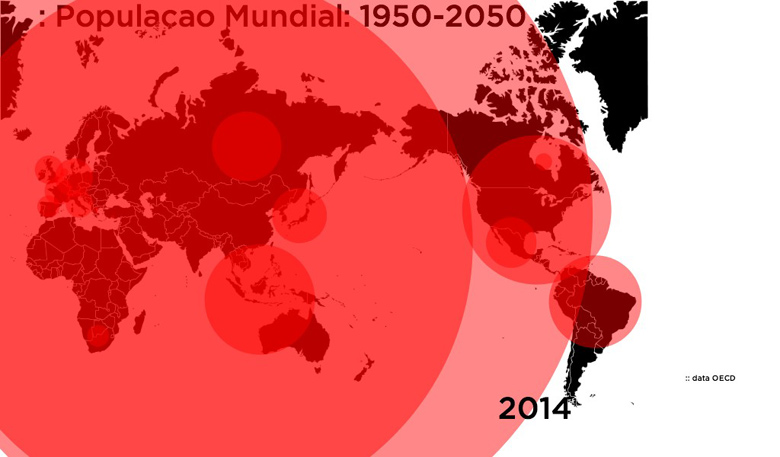 Latin America, compared to the rest of the world, is where the social-economical difference between the rich and the poor is bigger, the middle class is almost inexistent and every year rich people get richer (search the top 10 richest man in the world) and the mid and low classes are worse and worse. The idea of this Project was to show the social economical gap of Mexico´s population, the great difference between the capitals and the other smaller cities, from north to south of the country every state has similar differences, but the social problems like poverty or violence change considerably between the states. For this I’ve found a database in http://www.informelatinoamericano.org/, it includes detailed information of the distribution of population and territory showing the conditions for obtaining opportunities and better jobs, I’ve chosen the most relevant fields for having an easy comprehension of each district status.This data visualization contains over 15,000 fields of information, involving the most relevant subjects of the 2473 districts (Municipios) of the country, divided by 32 States. 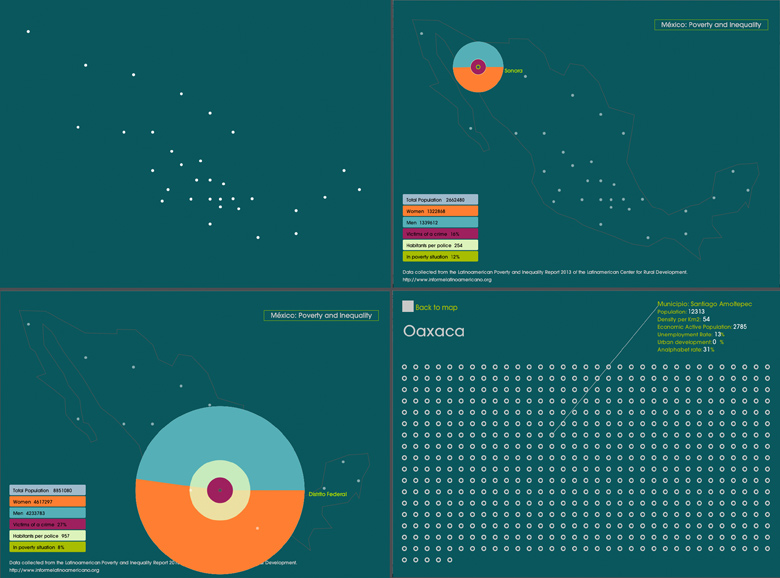 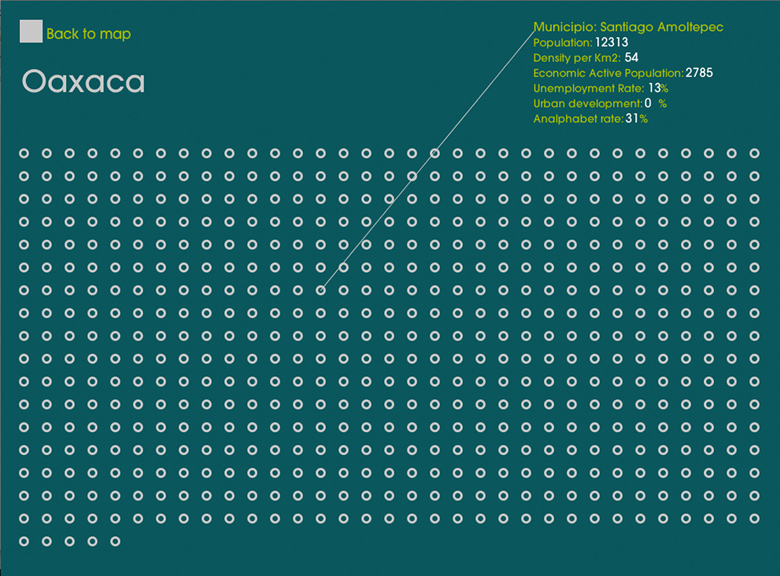 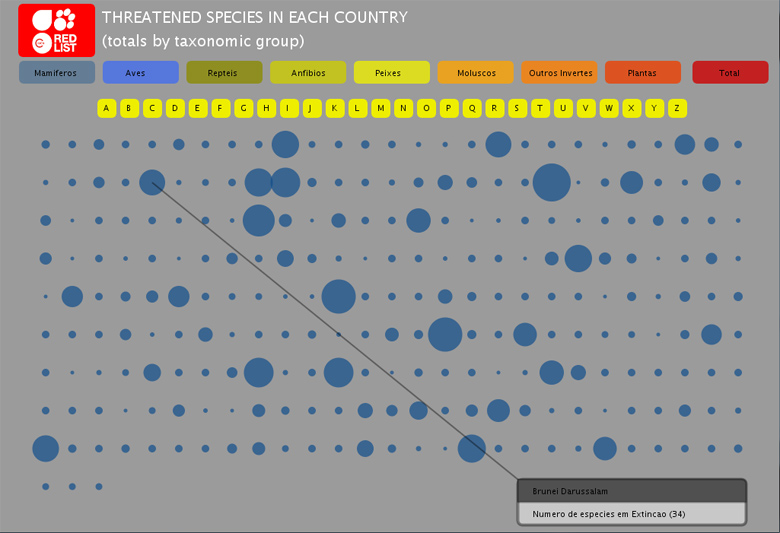 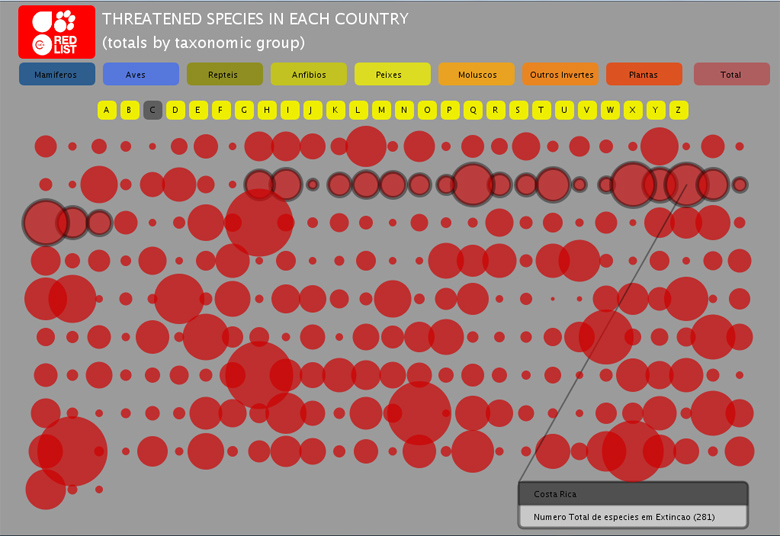 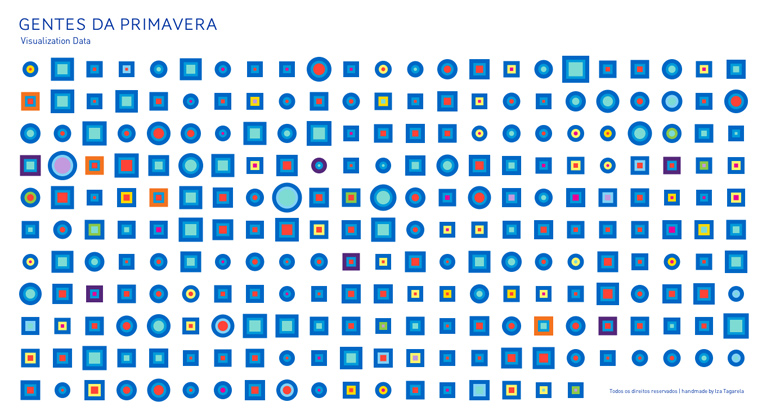 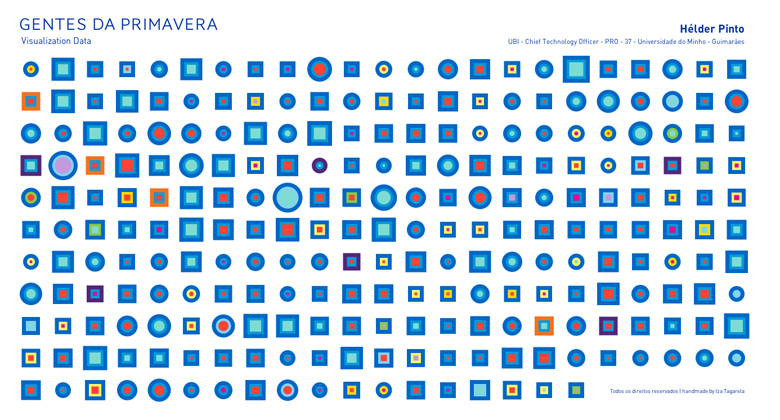 Gisela Nunes. The Sound of Discontent

The Sound of Discontent is a data visualization project that presents a brief timeline of the Occupy Movement protests around the world. There have been hundreds of protests worldwide, mostly in 2011, intended and organized as non-violent protest. The project is based on “The map of the Occupy world”, published by The Guardian on the one-year anniversary of the movement (September 17, 2012). The project visualizes the number of protesters along the timeline. Charts present these numbers, by continent, and the number of countries and cities where protests occurred. The cumulative numbers along time can also be seen. The user can interact either in a “play” mode, or by dragging the current time along the time window. When in play mode, sounds are produced as the timeline is traversed. A sound is produced for each continent, for each day, using simple oscillators, according to the number of participants for each day (volume), the number of countries (duration), and both the continent and the number of cities (frequency). This project is written in HTML, CSS, and Javascript, using the D3 library, and the Web Audio API for the sound. Data source: The Guardian Datablog http://www.theguardian.com/news/datablog/2011/oct/17/occupy-protests-world-list-map 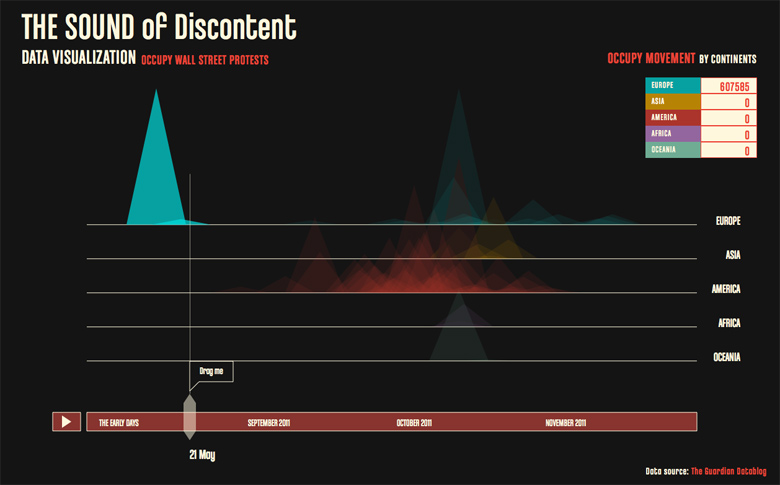 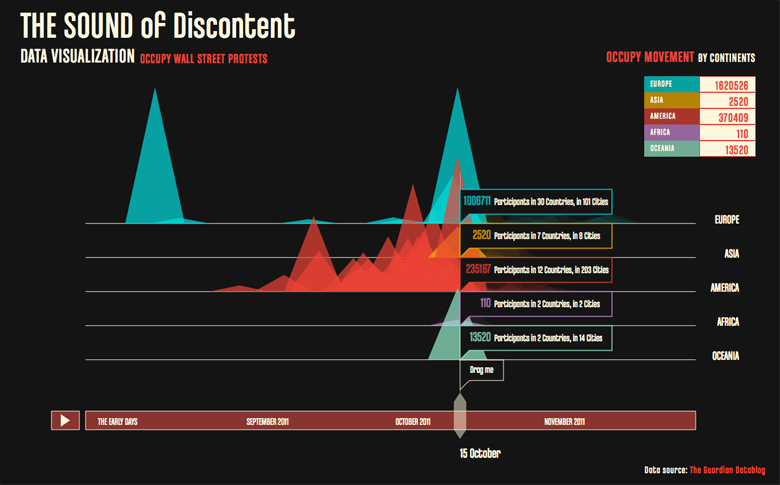 Project information visualization of artists who have sold more records.
Aims to verify who raked more and who sold more copies, as well as the country exports more music. 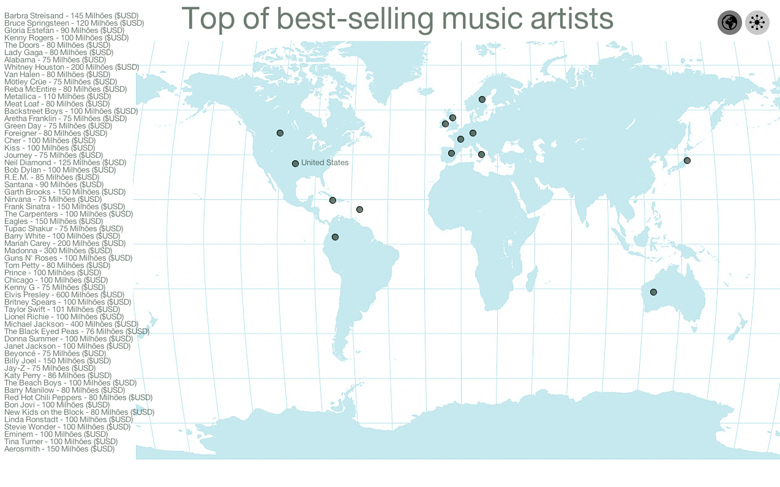 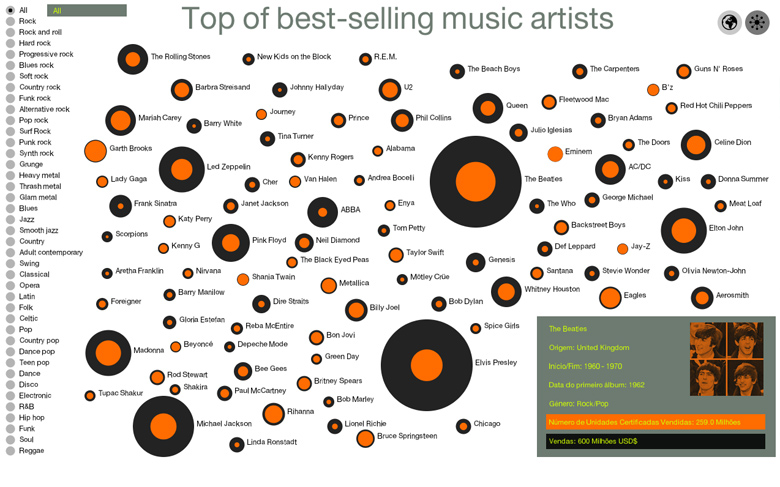 The four most dangerous words in finance are ‘this time is different.’ Thanks to the masterpiece book by Carmen Reinhart at the University of Maryland and Kenneth Rogoff of Harvard, no one can doubt this again. Leveraging data covering hundreds of years and bringing together a dizzying array of data, I created an interactive timelapse that lets users scrub around and explore the different types of financial crises in detail – as they occurred in the five continents and over the decades since 1800. This gives just the perspective we need on the current world economic crisis. People can’t expect to understand the current crisis without some in-depth look at past crises. http://www.reinhartandrogoff.com/data/ 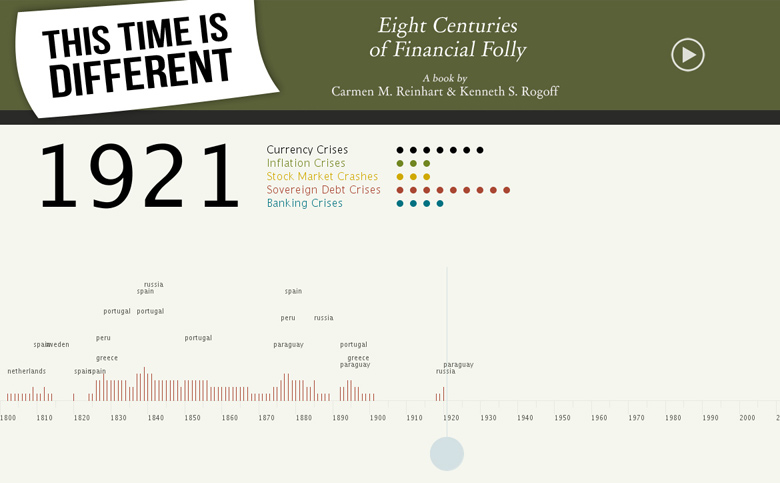 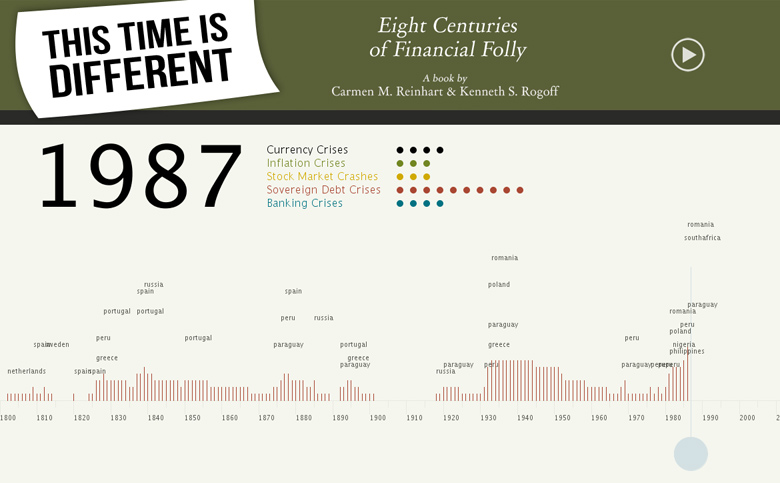 Visualization of music listening habits, based on data from the Last.fm online platform. It takes the 30 most listened to artists from the past year by a particular user, with a correspondence to their associated musical tags. This way it is possible to perceive the most relevant genres among these artists, as well as the genre similarity between them. 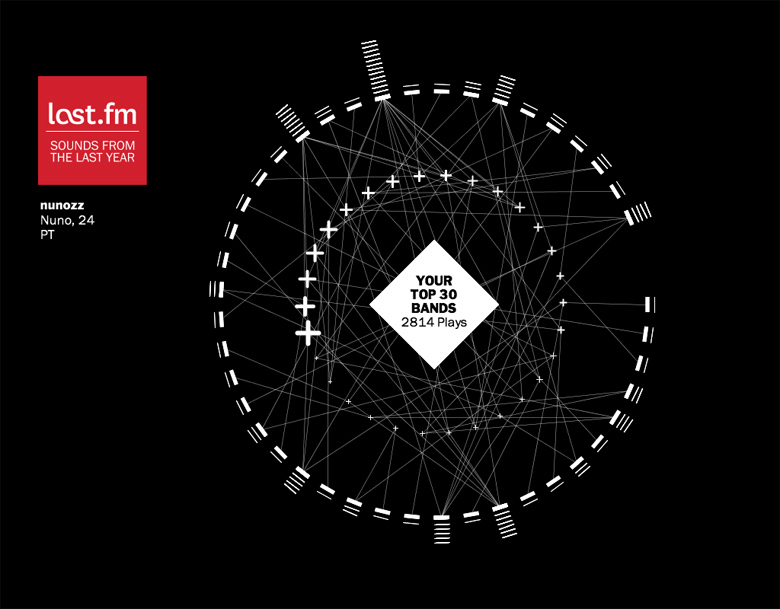 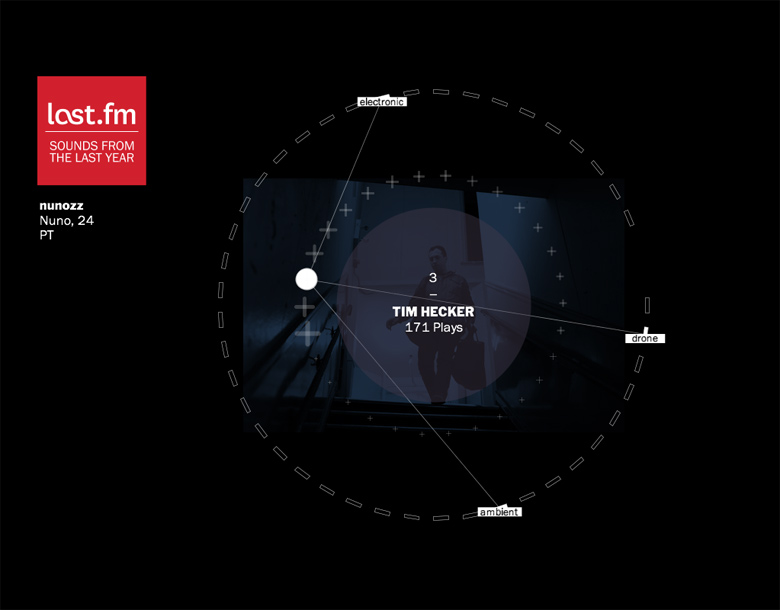 DotaStats (name subject to change) is a software created for DOTA 2 players to be able to easily compare their statistics with those of other players. Right now the software allows the user to compare statistics of just 3 players and only their average Kills, Deaths and Assists for one Hero* at the time. All this data is loaded from a text file. The user interface is designed to be easy to read and compare. All the buttons have mouse over and selected status. When you mouse over a button, that button gets a white stroke around it, to be make it more noticeable, and a box pops-up above it with the name of the Hero* you are selecting. Once you click it, the software shows you the stats of the 3 players with that Hero*, and the icon gets an aura, so you can easily identify which one you have selected. The bars have different colors for different statistics and can be easily compared from one player to another (for e.g.: Green Bar = Kills, the player with the bigger bar has more kills on average with that Hero*). And for users who want even more detailed information, they can mouse over the bars to make the numbers and description pop up. In future iterations of the software I would like to add more statistics, like: average Gold per Second, average Experience per Second, Win Rate, average Last Hits/Denies and Most Purchased Items; and integrate the software with the game’s own API which would possibly allow for real time information as well as a much larger database of players. All the data used in this software was taken from the website www.dotabuff.com. All the icons, avatars, and hero names are the property of Valve Corporation. For more information about DOTA 2 please visit: www.dota2.com   * Hero is the name given to every Playable Character in DOTA 2. 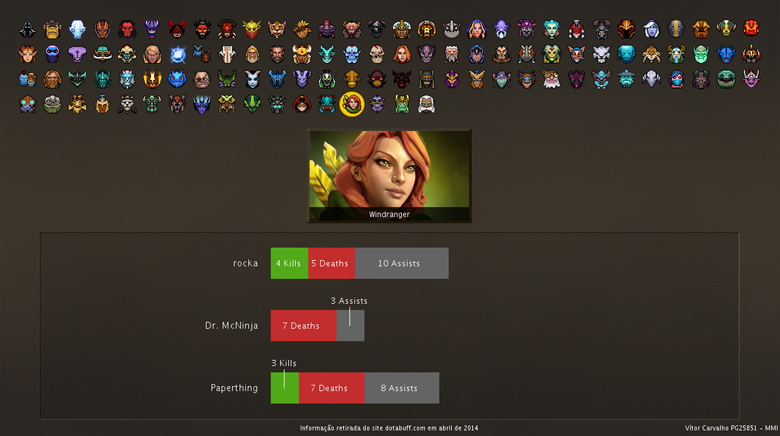